Congratulations go this week to Pauline for completing her Level 2 Faber book and moving on to a whole new set of more advanced books!  She has committed to working towards advancing through the levels in the Music Development Program and is preparing for a spring assessment. 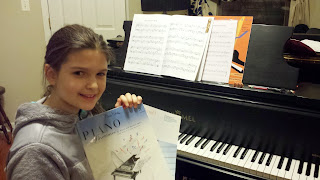 Good work, Pauline!
Posted by Aubrey at 4:09 PM No comments:

Email ThisBlogThis!Share to TwitterShare to FacebookShare to Pinterest
Labels: congratulations

The Studio Stars of the 2013-2014 school year have been decided (a little later than usual - I'm sorry!) and I'm happy to announce that the winners are Mary and Kabir!

Mary has proven herself committed to music this year by working very hard in lessons, flying through her newest Suzuki Book, and performing at a consistently high standard.  She has performed in every studio and department recital, participated in all competitions and festivals she has been eligible for as well as joining up with the Music Development program.  To recognize this achievement, Mary is being awarded 5% off tuition for the remainder of the school year as well as her choice for where she plays in the order of this year's studio recitals.  Congratulations Mary! 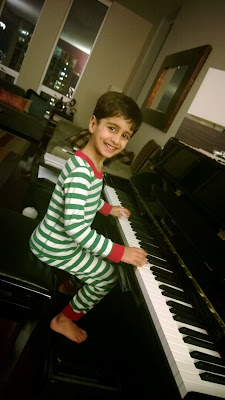 Kabir, this year's second place winner, has continually proven himself to be a committed student with a passion for music.  Because of his enthusiasm, careful preparation and maturity in taking on some of the responsibility for his musical assignments, Kabir is being awarded one free piano lesson in which he can choose anything he wants to work on at the piano.  Congratulations Kabir!

All of my students are eligible for these awards, which are given yearly.  Mary takes lessons in my home studio and at Sherwood, and Kabir takes lessons at Sherwood, so if you see either of them in the studio or the hall, please congratulate them on the hard work they've put in this year!

(Donations to future scholarships can be made at FaithSlaker Music's donation page.)
Posted by Aubrey at 6:38 PM No comments:

By hearing a recording before learning a piece, students internalize an overall concept of the music.  They do not have to be able to play it to get an idea of what it sounds like.  This process of absorbing the entire piece through the ears supports what educators call "whole to part" learning.  When the target is established first, it is far easier for students to know where the steps of the learning process are taking them.  Knowing what the end result will sound like is not only motivating, it also sets up a category in the brain into which all of the random bits of learning can be readily organized.  Learning is then more efficient and effortless.  This mental soundtrack also makes memorizing and performing easier and more secure.

Excerpt from Studying Suzuki Piano:  More than Music by Carole L. Bigler and Valery Lloyd-Watts, 1979.
Posted by Aubrey at 12:08 PM No comments:

Congratulations this summer to Katie, the winner of this year's performance contest!  She demonstrated that she has the skills, the patience, and the mental discipline to learn a new piece entirely on her own and get it to be performance-quality!


The piece is called Serenade, by August Muller - A German-born Classical Era composer.  Notice the careful articulation and repetitive Classical-era nature of the piece.

Katie's prize will be an exciting collection of new piano music.  If you see Katie in the hallways of Sherwood or at a soiree, please congratulate her on her hard work!  Thank you to everyone who participated this year in the summer contest.  I'm so pleased to see what everyone is able to do on their own.  See you in lessons this week!

(There were no qualified entires for the composition competition this year.)
Posted by Aubrey at 12:34 PM No comments:

I hope everyone is enjoying their extra time to practice every week since we don't have lessons for a while!  The following students can be seen in this video performing at last week's Sherwood Suzuki Piano Department recital!

Posted by Aubrey at 1:34 PM No comments:

Email ThisBlogThis!Share to TwitterShare to FacebookShare to Pinterest
Labels: performing

Songs That Get Stuck In Your Head

When was the last time you had music stuck in your head?  Is there a song in there now?

As a musician, the likelihood that we're hearing music in our heads is high since we're programming our brains to run through the same melodies over and over again through practicing.  And our brains are actually practicing when that is happening.  Cool, huh? 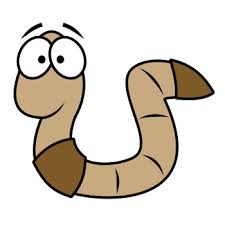 be a musician to have them.  How many times have you been walking along, and your footsteps happen to be the exact bpm (beats per minute) of the song from a commercial you heard on TV earlier that day - and before you know it, you're singing along, walking to the beat.  That sounds kind of nice, right?  Well, how about later, when you're sitting down to dinner, or to do your homework and it is STILL there?  Or when you're trying to fall asleep that night?  Or even..... when you wake up in the morning?!

Here is a fun little background on ear worms, including the science behind them and even multiple examples of pretty famous ear worms.

(My husband just had to get up and close his office door as I'm listening to these fun melodies saying, "Do you know how hard it is to write intelligently when you have, 'I am stuck on Bandaid brand, 'cause Bandaid's stuck on me' stuck in your head?!")

Between now and the start of the fall semester, students of mine should first listen to and read about ear worms by clicking on the link above and then jot down any earworms they have in the next month their music notebook as well as what they did to get RID of them.  Be prepared to discuss this in September's group classes!

Posted by Aubrey at 8:34 AM No comments:

All students of mine at Sherwood or FaithSlaker Music:

I hope you're all having a great summer so far!  Care to show us all what you can accomplish on your own?

This summer there are two contests.  The first contest is to compose your own piece of music and perform it via video.  You do not need to write it down.  Decide what the mood of the piece is and use as many piano techniques that I've taught you as you feel like!  The second contest is to learn and perfect a piece entirely on your own.  This may not be a piece we have previewed in lesson and it may not be a part of the Suzuki repertoire if you are a Suzuki student.  The piece needs to be performed with beauty and accuracy, but does not need to be memorized.  As always, winners will be selected based on accomplishment within their playing level, musical expression and daring choice.

Entries must be received by midnight on August 30th (via youtube, vimeo or mp4) and winners will be announced via blog/twitter/facebook on Labor Day.  There will be one winner and one runner up for each category (composition or repertoire) and the winners will be awarded fun sheet music to work on in lessons as well as the privilege of having their performance shared and admired.  The winner of the composition contest will be able to play his/her composition in the next studio recital.

Now, head on over to the piano, warm up with your performance pieces, and see what you can do!  I look forward to watching all the entries!
Posted by Aubrey at 7:41 AM No comments:

Email ThisBlogThis!Share to TwitterShare to FacebookShare to Pinterest
Labels: contest

Congratulations go out to Fiona and Declan, who after doing the fall Royal Conservatory of Music assessments, hunkered down, practiced hard, and participated in the spring assessments!

They both did a really wonderful job and are creating a solid trail of their musical education with an esteemed nationwide program.  If you're interested in learning more about the program yourself, please let me know and we can discuss how your child can benefit from participation!
Posted by Aubrey at 7:27 AM No comments:

Email ThisBlogThis!Share to TwitterShare to FacebookShare to Pinterest
Labels: congratulations

I hope everyone is enjoying the beautiful weather this weekend!

For your viewing and sharing pleasure, the following videos are from the most recent studio recital:

To view the performances of Mary, Chloe and Keli, Jerecho, Kabir, Diego, Declan H., and Evan play the following clip.

To view the duet performance of Graham and Mary as well as the Chopin Prelude, view the following clip.


Congratulations to everyone and I look forward to working with each of you in the coming weeks to help you reach your summer goals!  Happy practicing!
Posted by Aubrey at 8:49 PM No comments:

Posted by Aubrey at 6:33 PM No comments:

How is practicing going at home?  I ask, because it is easy to get into the habit of practicing in terms of time instead of accomplishment, especially at this time of year.

I'm thinking about your child's practice this week because for the first time in a long time, my practice goals are seriously constrained by time!  I can only practice a few minutes a day due to an injury and I'm finding that I have to be so very efficient!  Here are some of the ideas that I am keeping in mind for my practice:

For the young child, teaching the idea and feeling for self-motivated discipline is so important, and music study is a perfect way to tackle this.

Here is an article with more details on practice techniques that you might enjoy.
Posted by Aubrey at 8:15 AM No comments:

Well, the scores are in, and anyone who participated in the Achievement Program assessment on December 2nd can be very proud of themselves.  Not only did everyone pass, but everyone passed with quite high marks!  I couldn't be more pleased!

Congratulations go out to:

A little bit about the program that these brave and talented kids participated in for those of you who are interested:

The Carnegie Hall Royal Conservatory Achievement Program is a developing national standard of music assessment much like the Canadian and European programs.


For students who are dedicated to advancement and are motivated through the idea of leveling up, I think this is a very good motivational tool. It works a bit like PianoFest, however, the grading procedures have a lot more meaning. The piano repertoire has been organized by level and at each level, there is an assessment that a child goes through with one judge - playing repertoire, scales, sight-reading etcetera.


I think it is a very well-put-together compete program that assures everyone that your child is getting a solid musical education held to a national standard and I'm looking forward to working with my students in this program.


There are three possible assessments per year, and children sign up whenever they're ready for one. Some of your children may already be playing the pieces that they would use in the assessment! If you are interested, please talk to me at the beginning of your child's lesson.


Here is a link to an overview of the program:

Posted by Aubrey at 8:04 AM No comments:

Declan is moving on up!

Congratulations to Declan, who has been working diligently at the piano in 2012 and is now a Book 2 kid!  Keep your eyes posted for an announcement of a recital to be given by him and his sister highlighting some of their favorite pieces from the last year or so. 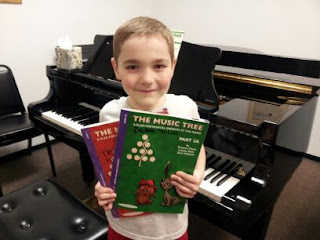 Good job, Declan!
Posted by Aubrey at 7:35 AM No comments: